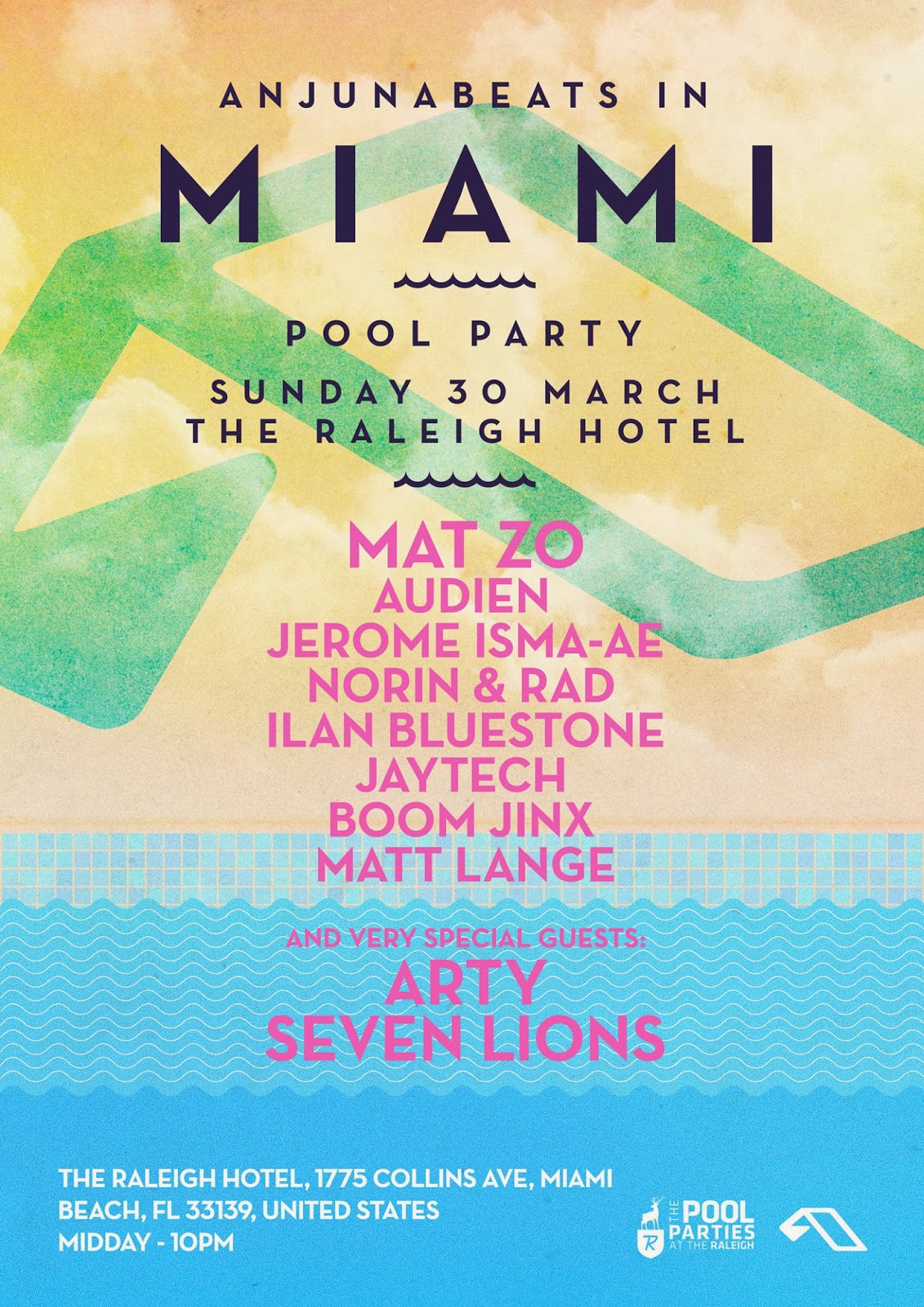 Ladies and Gents, my dear readers, I announce to you; WiDuh’s number one event for WMC/MMW this year(and many other years before)! I know what you’re all wondering. “Tell us WiDuh, why do you believe this to be the best event?”. I will answer you all dear readers in multiple answers that will outline everything that is great with music. Read that again guys, I did not say EDM or electronic music, I said music. Anjunabeats, one of the most succesful and innovative recording labels in the scene, has been gathering talent since as early as 2000 with some of the best trance the world has to offer. Anjunabeats has been in charge of releasing some amazing tracks over the years, with most if not all of Above & Beyond singles and albums. Now, on their 10th volume of releases in album, Anjunabeats brings some of their best artists to Miami to tear up the Raleigh Hotel with some of the most beautiful music available during this WMC. Let’s take a look:

Mat Zo: One of those young monsters on the rise, Mat Zo slowly gained the attention of such artists as Above and Beyond, Morgan Page and others. Mat Zo’s true success was accomplished with his collaboration with Porter Robinson for the beatport number 1 track: “Easy”. With an album recently released, Mat Zo has gone on a destructive “Damage Control” tour to take over the scene with some amazing sets that include some of the best trance hits, some good electro, and astounding mixing skills that incorporate into a few classics such as Faithless and others.

Audien: The man of the scene right now, Audien, has been destroying the top charts in the past few months with his hits “Leaving You”, “Circles”, “These Are the Days” and the anjunabeats monster “Wayfarer”. Audien’s Morgan Page-y style and feel has captured the attention of many fans and makes his sets some of the most exciting and innovative out there. If you want to see a good artist that will soon blow beyond control, don’t miss out on this chance to grasp Audien.

Jerome Isma-ae: Jerome is one of those artists that captured the traditional style of trance, copied it, adapted it to new generations and crowds, and then perfected it. His sets are more comparable to what Armin van Buuren delivers, with some impactful beats and drops that are style synthisized in that wonderful Trancy way that got people jumping 20 years ago and still does to this day. What’s the proof of why Trance will never die? People like Jerome Isma-ae.

Norin & Rad: Do you like Trance? Do you like hard, rough, bass-filled and pumping sets that make you feel like you’re flying through the sky in beautiful synths and amazing drops? Trance that makes you feel like you’re in a roller coaster of awesome? Then you NEED Norin & Rad. Some of the roughest, most exciting sets out there in the Trance world, Norin & Rad are probably the funnest duo in the Anjunabeats family and some exciting fellas to watch. Get wet and wild at this pool with their sets, I assure you it’ll be an experience you’ll enjoy.

Ilan Bluestone: I consider Ilan Bluestone the calmer version of Norin & Rad. Good drops, exciting beats, but beautiful synths. It’s like the calm before the storm. It’s the wind before it hits the trees. It’s like a wave before it splashes and breaks. It’s like music discreetly seeping into your ear, and then popping that ear drum. Hell yes. That’s exactly what you should want, readers; unexpected ear drum pops!

Arty: I’ve been following Arty since the early 2010’s with releases such as “Sunset”, and was thoroughly and fully impressed when I heard “Kate”. Since then, Arty has gone to fill a spot in the top 100 Dj’s in the world, collaborating with giants such as Armin van Buuren and Paul van Dyk, and headlining shows all on his own. His songs and sets have that beautiful in-between of trance and progressive that makes my skin chill, my feet go wild and my heart roam happily. If you’ve never stopped to truly grasp one of these sets, then do so next to the water on a pool party. So that his sunset tracks may match the lowering sun in the background.

Seven Lions: Oh god. Seven. Lions. S-E-V-E-N L-I-O-N-S. I discovered Seven Lions a few years back, right around the time that I had decided that Dubstep was no longer enjoyable. Right at the edge of giving up on anything with loud bass and those dubstep drops. And then Seven Lions came into my life. Mixing some of the most beautiful produced tracks I’ve ever encountered into some perfectly aligned drops, beats, bass, synths and spine-chilling female vocals, Seven Lions has taken the world into his palm and shown everyone what they have been missing. If there’s any artist I wished to hit it big, was Seven Lions. And now here he is, hitting it BIG. One of the best additions to Anjunabeats, Seven Lions is a masterpiece within a masterpiece. He is like the smile within the Mona Lisa, unexplicably attractive.

Jaytech: Because. That is why. BECAUSE. Jaytech is the type of producer for which I started listening to Electronic Music in the first place. In my late childhood it was this kind of trance which pulled me by my soul and dragged me into the world forever. Those synths that are so calm and yet grasping; so relaxing and yet fill you with so much energy. It’s the type of music that makes you happy and calm while at the same time making you want to jump up in excitement! A long time mixer of Anjunadeep compilations, Jaytech, gets in deep. Deep into your soul. So deep, it might just feel like you’re getting surprise butt sex, but in your ears.

In short, Anjunabeats perfectly exemplifies all the aspects of what’s grand about Trance. To further it, Anjunabeats brings some of their deeper acts to create that perfect distribution available for all music lovers willing to fly on a journey of the best the trance world has to offer. What’s an Anjunabeats pool party like? It is like god gifted you with the ability to fly into space, with the ability to breath in oxygen from out of nowhere and then suddenly you go on a trip through the planets. Every planet is one of these acts, and you will rock out to every single one on the best trip of your life. Get it while you can, because this WILL sell out. And what better way to end your WMC/MMW experience than with the best that electronica has got to offer? No way. No better way. Do it. Buy it. Rock out, and then thank me later. Or just thank me at the party when you’re dying of happiness. Whichever one sounds best to you guys!

Writer at WMC 24/7
“Confusion” by New Order. At age 8, WiDuh was first introduced into the world of electronic music with this song. Since this early age, he already appreciated the evolving sounds of a growing musical world. Now a DJ and a fully immersed electric lover, he joins the WMC 24/7 team to give everyone a small glimpse into the different artists, sounds and experiences of the most amazing music known to him.

Latest posts by Widuh (see all)